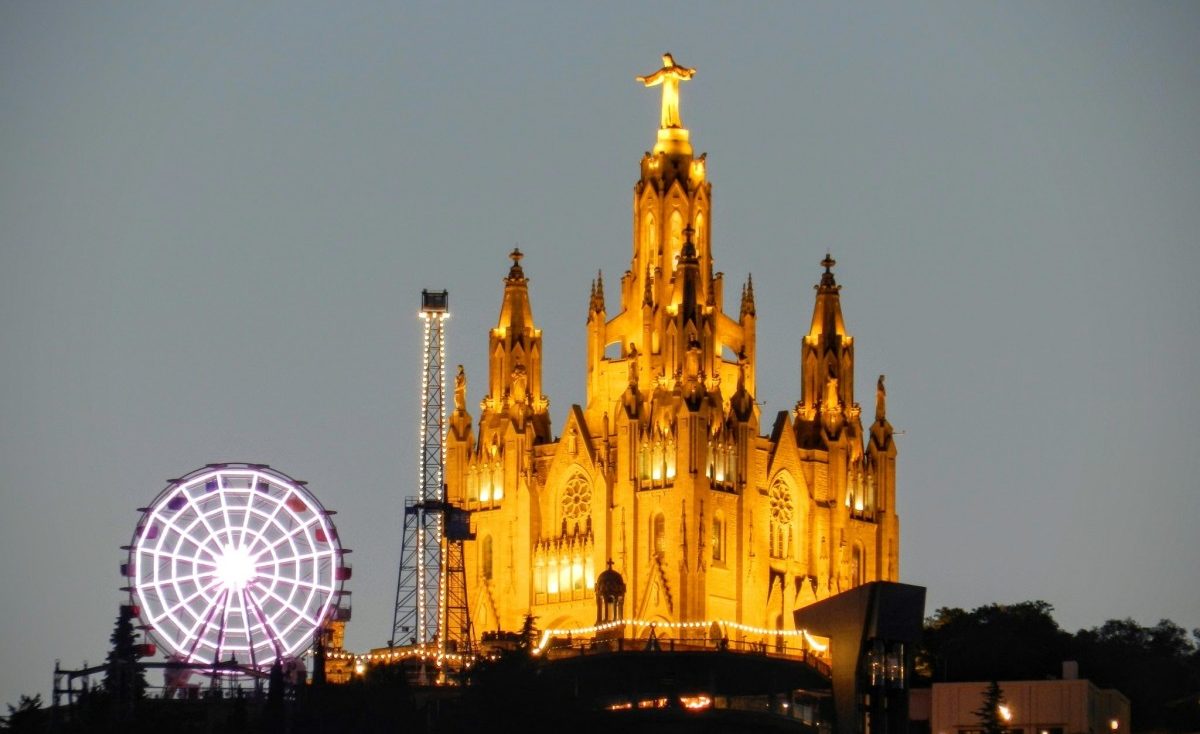 Tibidabo is a little far from the city center but it’s not to be missed. It could be interesting to spend a day there. There are many things to do and to see!

–The view of Barcelona is incredible because it is the tallest mountain close to the city!

–The Expiatory Church of the Sacred Heart of Jesus  is the church that you can see when you look at the mountain.  And it is even more beautiful and impressive when you are there!

–The Torre de Collserola, the tenth floor of the tower is open to the public. It is a great viewpoint of the city.

– Tibidabo amusement park ,the park is among the oldest in the world still functioning, it is Spain’s longest running amusement park and Europe’s third-oldest. It was build in 1899. But don’t worry it has been renovated by the city of Barcelona!

It is 1 hour from Plaza Catalunya, so to get there you can take the S1 train and stop at Peu el Funicular, then take the Funicular FV until Vallvidera Superior and the 111 bus  until Pl Tibidabo. 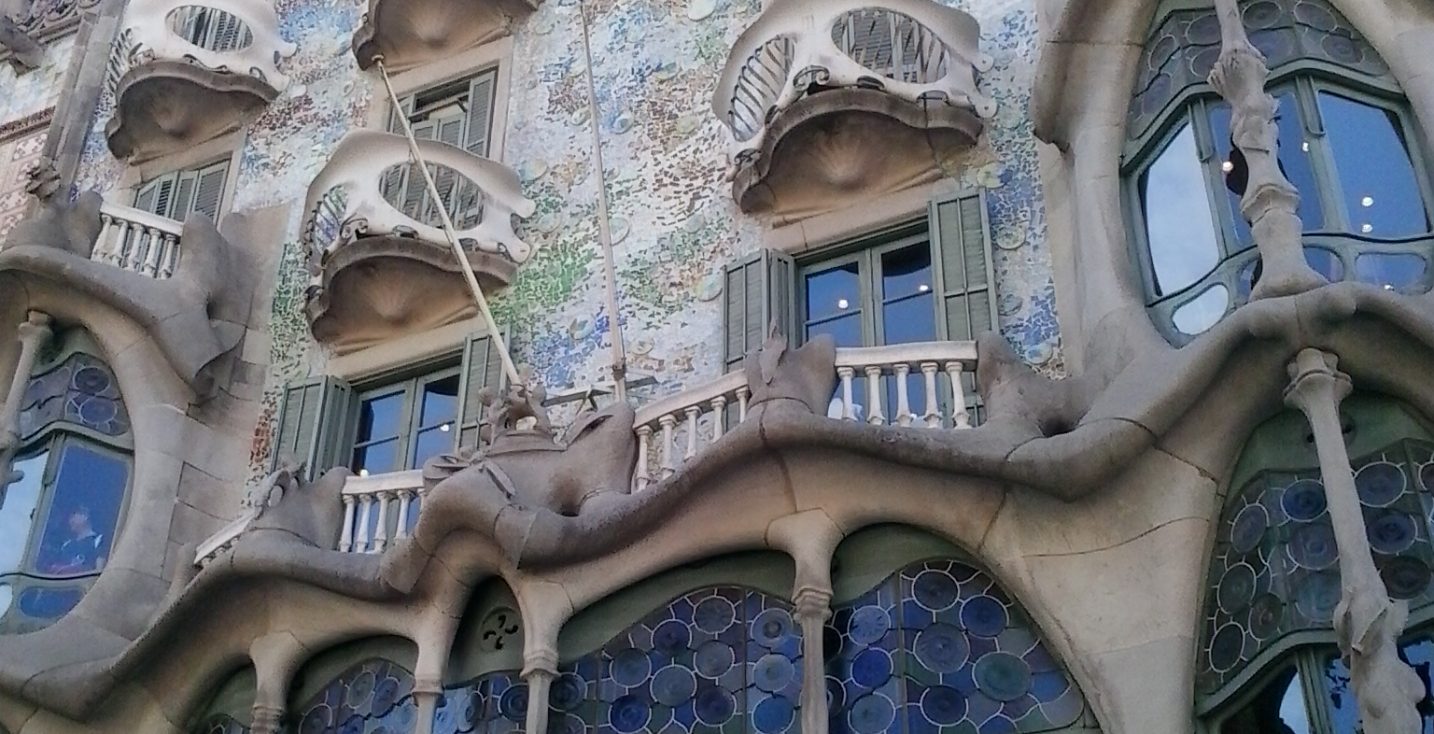 In this Article you will find a short description of 3 important monuments in Barcelona, the 3 most beautiful Gaudí’s buildings. You can visit the 3 in one afternoon thanks to their localisation which is close to each other. You can begin your tour to the metro Passeig de Gracia and walk! (each visit is approximately 1 hour to 1 hour and a half. We advise you to buy the ticket on internet for the waiting time, or you can also only see it to outside).
The building was order by Josep Batlló i Casanovas, for a textile industry. The most famous parts is the facade, considarate like one of the most original of Gaudí. Then you can only walk and see it to outside and take some wonderful pictures or go inside and do a tour (click on the name for go to the official website). Nowadays it is on UNESCO’s World Heritage List with more than a million visit a year.
La Casa Milà, was build like an hotel, generally classified a monumental work of arts of Catalan modernism of the first decade of the xxe siècle. This was the penultimate project led by the architect. During the construction the municipal Council was against it, there had a lots of the mockeries of the inhabitants for the style. But nowadays it is on UNESCO’s World Heritage List.
Casa Vicens is the first total architectural work of Antoni Gaudí. was ordered by a stockbroker. The house was private and did not receive visitors until its purchase on March 27, 2014 by MoraBanc for renovations and a museum where exhibitions will be held.
akiraflatsJuly 17, 2018 Leave a comment on Gaudí’s buildings Monuments 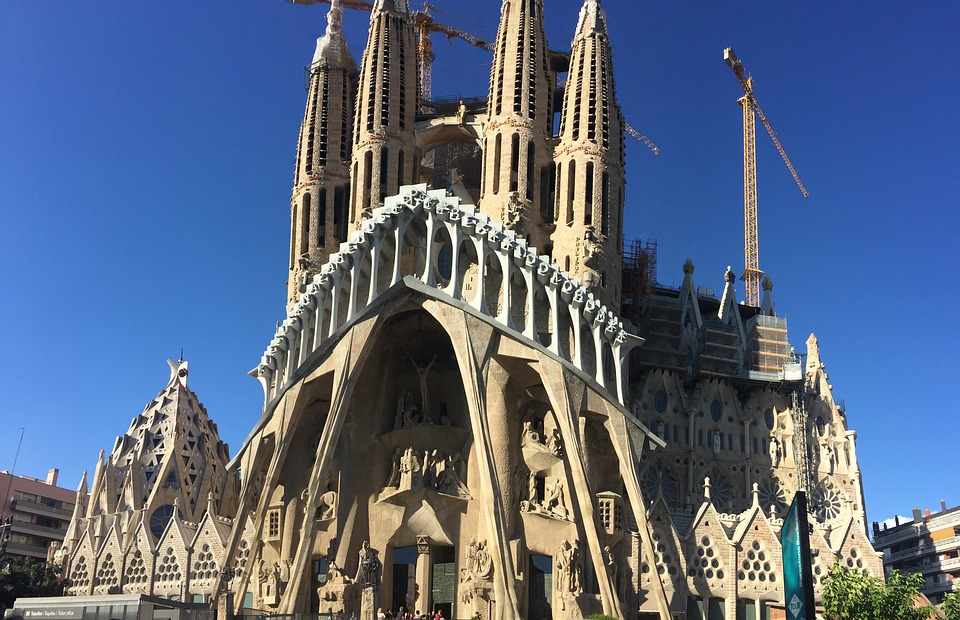 The unfinished work of Gaudi is for Barcelona what the Eiffel Tower is for Paris. The Sagrada Familia is the symbol of the city. Listed as a UNESCO World Heritage Site in 2005, you can not leave Barcelona without visiting it. You can see it from outside and admire this work that was the most important of the Catalan artist and architect Gaudi or enter this place full of history and let them count. (click to go to the official website)
The Sagrada Familia, whose construction began in 1882 is the end of life work of Gaudi, he will participate for more than 20 years but will see only the beginning of construction since the expected date of completion of the work and for 2026 is 100 years after his death. The Basillica is with these 4.5 million visitors in 2016 the most visited monuments of Spain.
A lot of the offers of AkiraFlats are near to the Sagrada Familia, don’t hesitate to contact us for more information.
Time needed: Exterior 30min, Interior 3-4h (if you bought the tiquets before) How go to the place: Metro : L2 or L5 until Sagrada Familia Bus : 19, 33, 34, 43, 44, 50, 51, B20 or B24
Or use apps for scooter rental like YUGO (promotional code: 8X7ALK4I6S) or eCooltra (promotional code: kntgb) it’s promotional codes will offer you free minutes of running.
akiraflatsJuly 17, 2018 Leave a comment on The Sagrada Familia Monuments 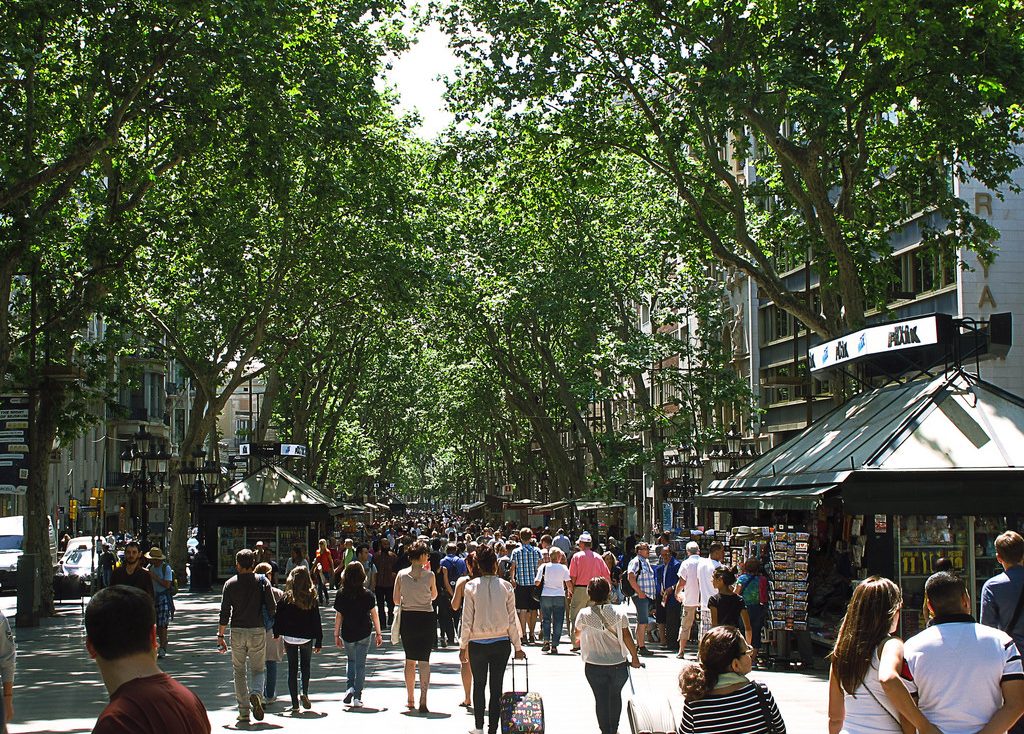 This article talk about the center of Barcelona, it’s a place very touristic but you need to see it during a trip in Barcelona. Our advices is to walk from one of the ends of the Ramblas to the other and stop to see the two others places.
akiraflats July 17, 2018July 17, 2018 1 Comment on The Ramblas, Boqueria marcket y plaza Reial Advices Barcelona, Monuments 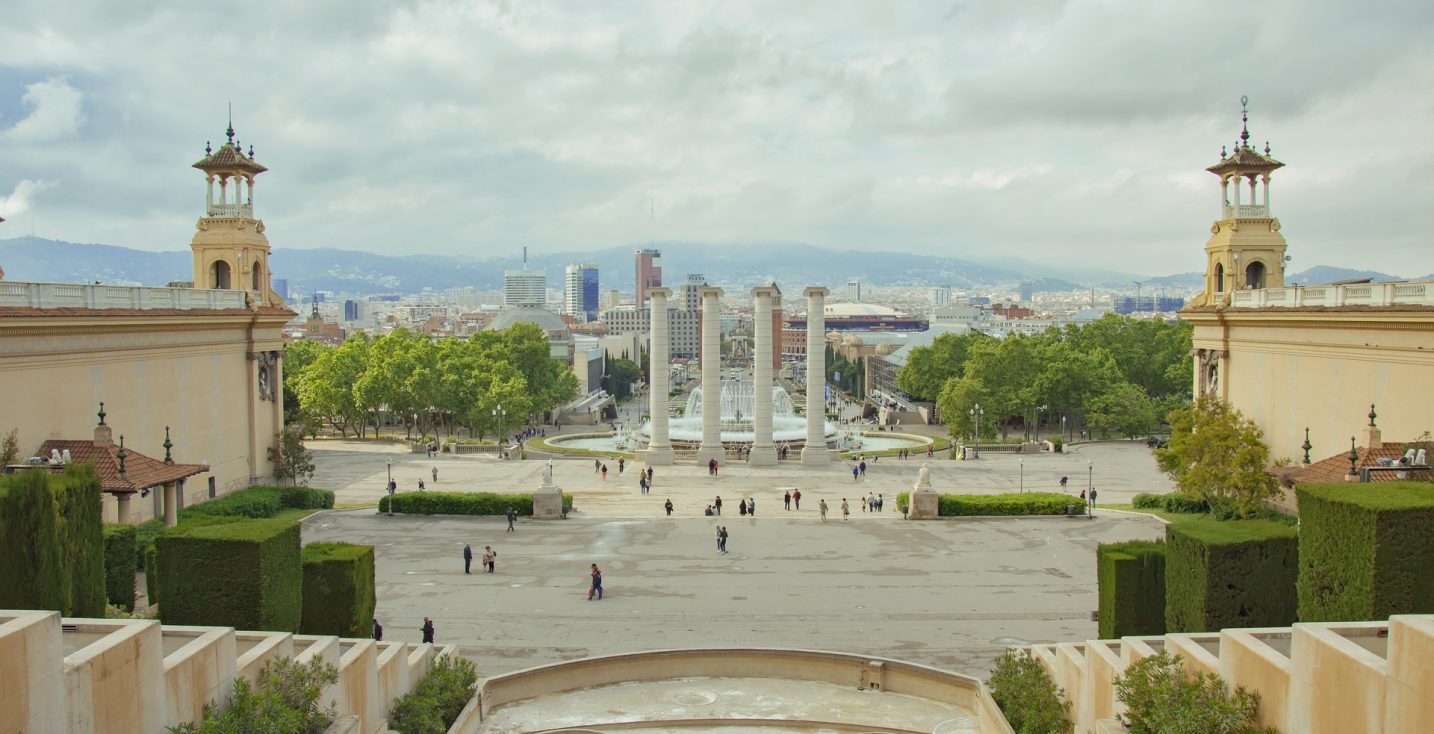 Time needed: Half a day to visit Montjuic.

How go to the place:Metro : Line Red and Green : Stop plaza Espagńa Bus : for go to the top 150

The Palau Nacionalit’s the museum which have the most important collection of catalan art in the world.

The Famous Fontain of Montjuic.It’s already wonderful in the day but some night there are a spectacles of Song and light beautiful. The duration of this spectacles is 30min and you can see it :

The Castel of Montjuicis up the mountain. You will find there a beautiful view of Barcelona, walk on the ramparts of the castle, visit the military museum. You also can eat there for do a break of your visit.

The Fondation Joan Mirópresents paintings and sculptures including an open-air part of the works of the contemporary artist Miró.

In the Montjuic Botanical Garden, you can stroll among more than 2000 species of plants from all over the world and enjoy an aerial view of Barcelona in the background. Magnificent ! A real tour of the botanical world! The current Barcelona Olympic Stadium was built for the 1992 Olympic Games (different of the Camp Nou, the stadium of Barcelona) 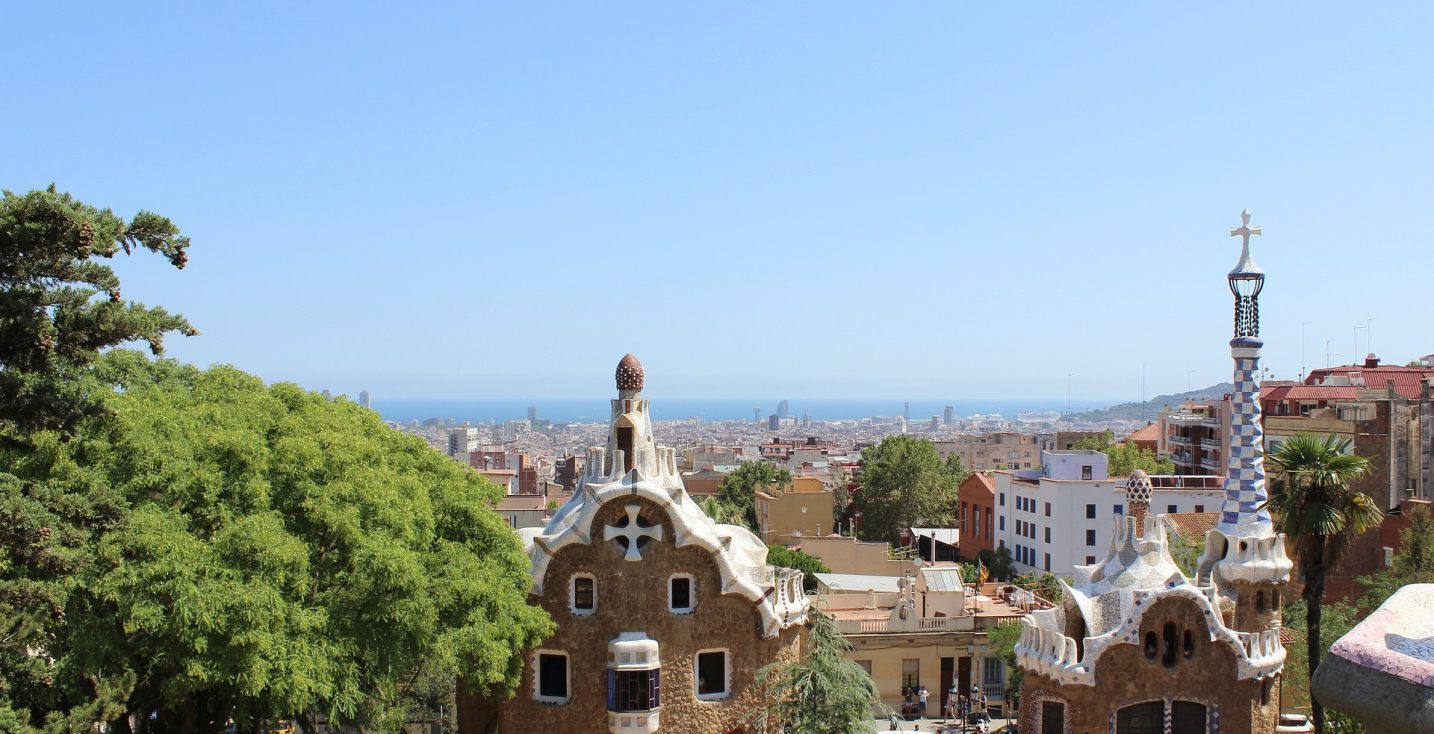 The Park Güell is a public park system composed of gardens and architectonic elements located on Carmel Hill, in Barcelona. With urbanization in mind, the park was designed by Gaudi on the demand of Eusebi Güel. The park was built between 1900 and 1914 and was officially opened as a public park in 1926. In 1984, UNESCO declared the park a World Heritage Site.

This park is also a symbol of city for go there you can use the Metro, line green(L3), stations Lesseps or Vallcarca or the Bus urban, line H6, D40, 24 et 92.

The duration of the visit is around an hour for the free parts (the most important), a little parts is around 8euros for see a beautiful view of Barcelona and some arts of Gaudi. You also can go and see the Casa del Guarda which is one or two hours.